Where I live I saw a couple Toyota 70 series land-cruisers up for sale that came from a mine. They were only 4 years old but their frames were riddled with rust. When I talked to the seller he mentioned how the brake cables in particular required replacing in a few months time. Any part, let alone truck in itself, that can last more than 10 years in a diggy-hole has my vote for holding a skookum title.

I suppose it's fair to say that when Mercedes were Mercedes would they create higher quality parts than Toyota themselves.

@ Baddy: Thanks baddy, this is really good to know. Honestly said it's relieving to hear. Before I thought that I'd no choice but to pay a premium for a possibly NLA part. Cheers mate!

@ Inkblotz: Oh my God, you're such a life saver. Please do! and name me your price. So long as it can fit on a 2400mm SWB base and have the two bolts I am interested in either the right or left. Thank you so much. I currently own a perrot brake cable, brand new. I can offer that. And /or an amount of money of your choosing via paypal.

@ Dcurbet: Perhaps once the covid19 thing is over I'll come over for a visit in the states at a friend's place. And for whatever it is worthwhile to know these are the parts that I only managed to find:

I tried to look for the english links for those others whom may stumble into this thread. Also sorry for the late reply, the website crashed for me only 10min before this reply was made. So I had to retype this all!
Those who aren't familiar with quality will chase quantity
Top

inkblotz wrote:For my old 460 swb 1984 hand brake part number 4604201385 Perrot brakes. Right brake cable. Are you sure yours require the 2-bolt wings? This cable does not have that.

I agree, yours appears to-be the 1710 MM perrot version. And yes sir, I'm replacing one of the two rear brake plates with the MB version. So I am in need of the winged versions. The previous owner mentioned how he replaced one plate with a perrot version instead dueue to having several perrot brake cables to burn. One of which were included with the sale of my truck: 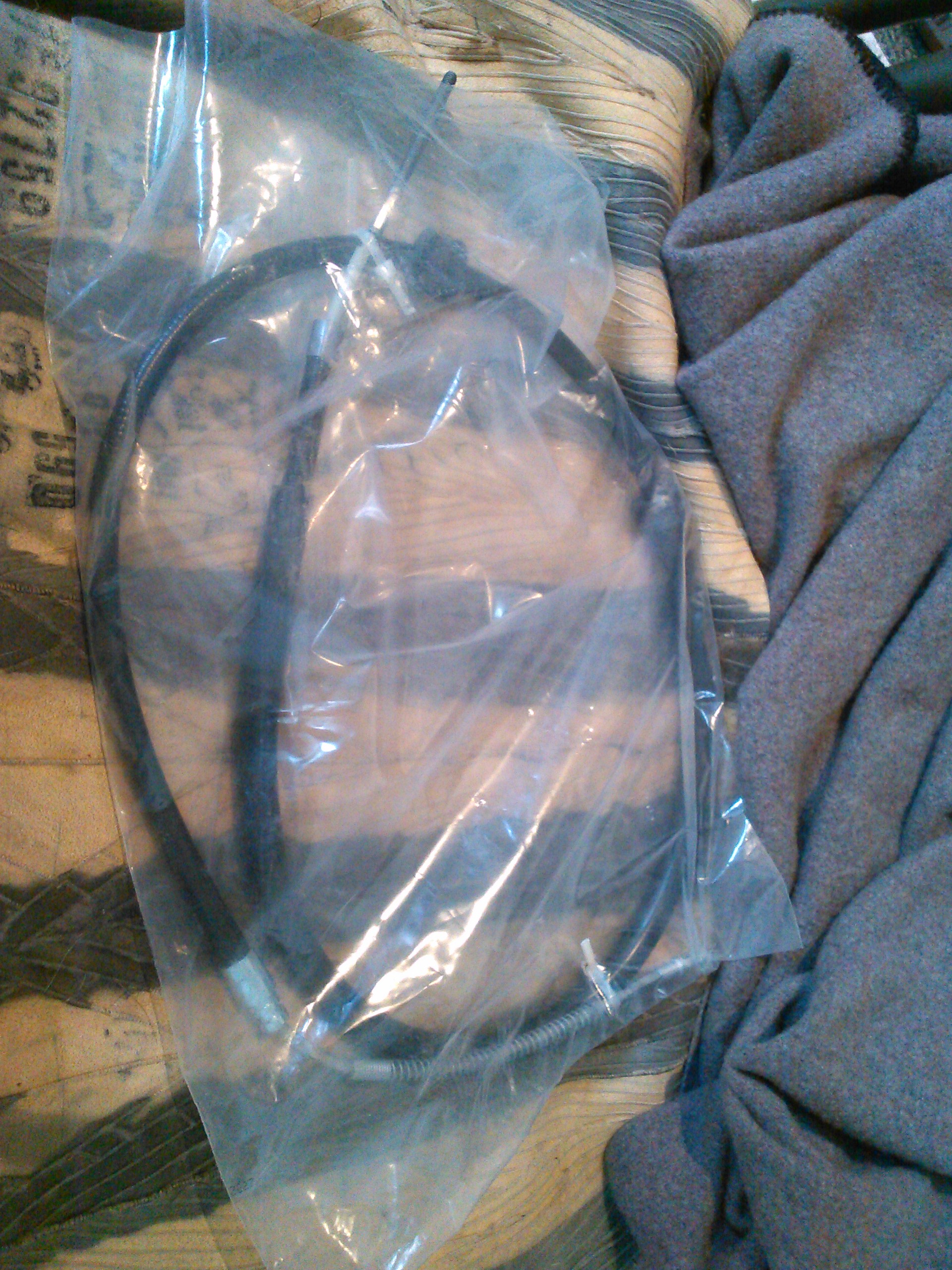 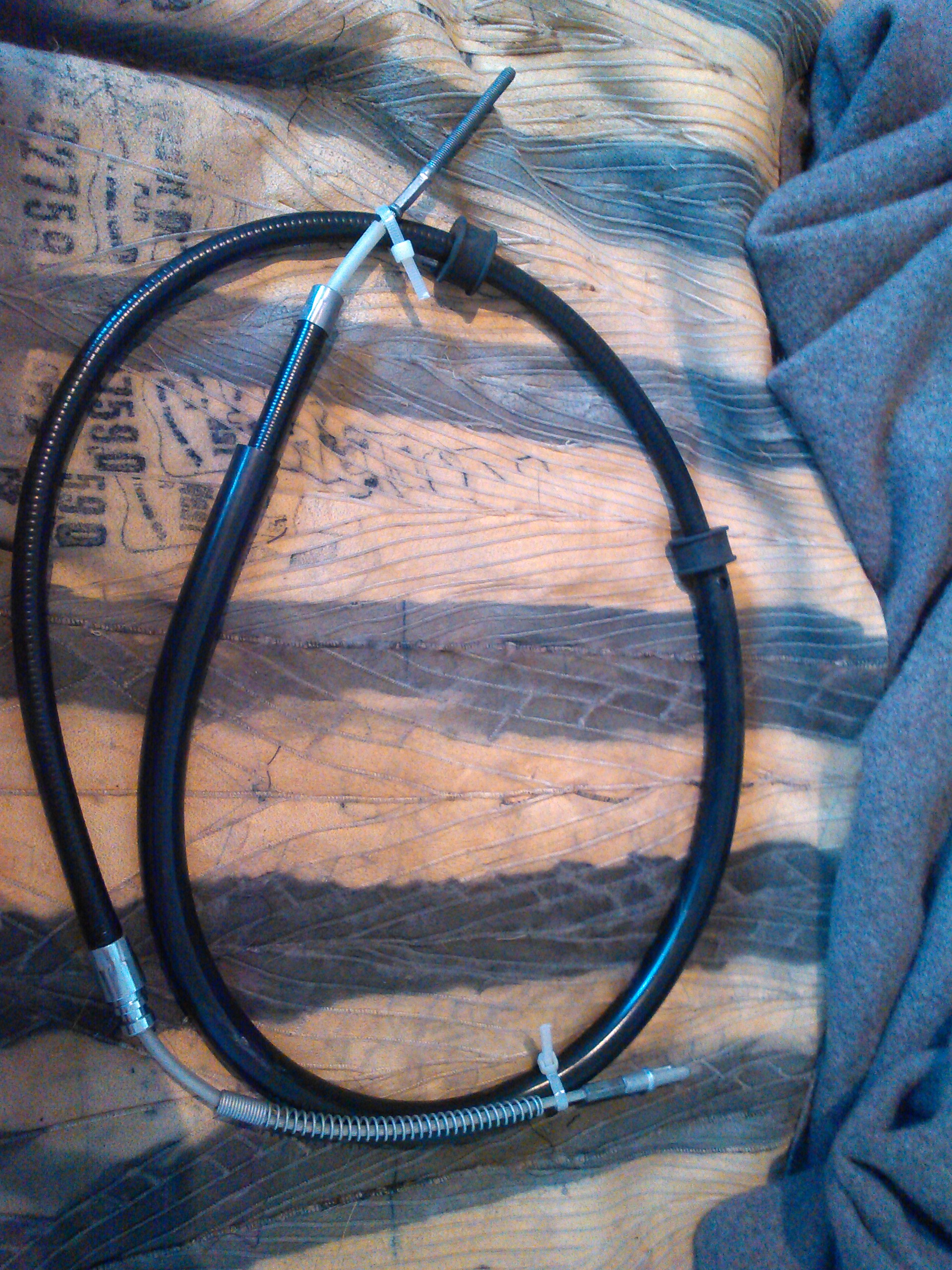 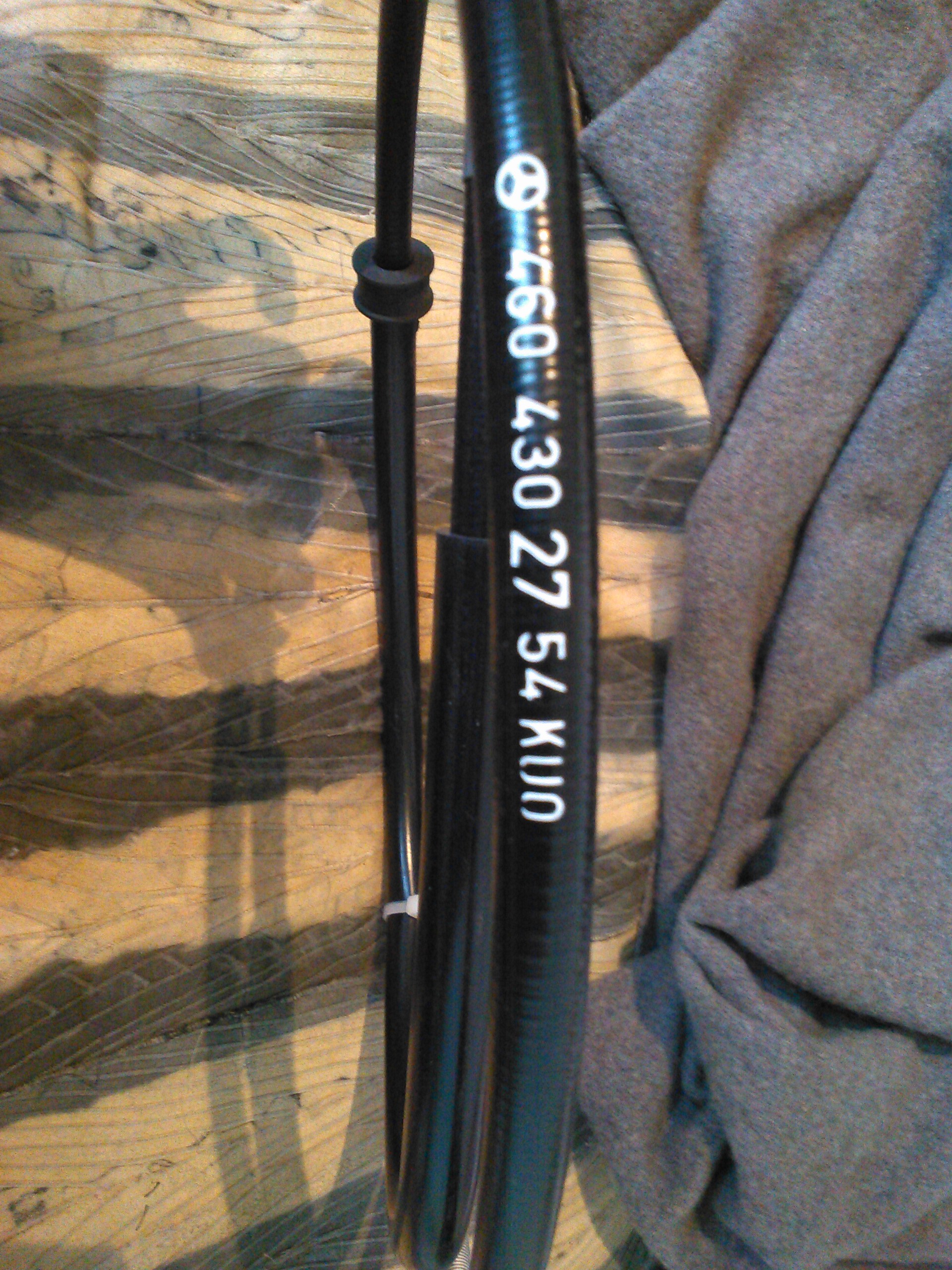 Being this baby. A460 430 27 54 with the words “ KUO “ at the end for whatever reason. Ironically enough it's a left cable to your right. However I've decided to have both my rear brake-plates into MB again so that I've easy access to cheaper brake-pads. Atleast I was told that much; that MB brakeparts are cheaper than the perrots these days. It's strange, considering I was under the impression that my old 1988 would have the perrots as their stock configurement.

Thank you for checking though, it was defiantly appreciated mate !

Those who aren't familiar with quality will chase quantity
Top

Are these usable left to right? I mean the length is probably a little different, but if a bit too long, that would not ba a big issue.

Cheapest and most reasonable way to renew the rear brake pads is to reuse the old brake shoes and just fit new pads to them (rivets). They don’t cost much from Textar.

The MB rear brake adjusters are far easier to source and much cheaper. How often do you have to replace them though? Service them once in a while.

Perrot parking brake cables are 1/3 of the price compared to MB.

Don’t fit too long cables. They might end up rubbing against a prop shaft or something else.

It's great hearing from you. I'm only experienced with some types of unimogs. Even then I've limited knowledge on their braking systems. As far as G wagons are concerned I am quite the oxygen thief. And I can see myself asking rather silly questions for the foreseeable future.

That disclaimer said and placed aside, my contacts in Europe claim that a majority of these cables are technically interchangeable. The previous owner of my truck bought a bulk amount of 4604302754 perrot cables and said that he had no issues with his other trucks using this length of cable for his now “go-to” SWB 290GD puch. But the cable difference is only that of 200mm at best. He never specified using the 2850mm ones in particular.

That said, you are totally correct and make a great suggestion. I can certaintly see myself looking into longer cables as options. That'll give me a broader 'parts-bin' to pick and choose for future parts to replace. Yet another reason why I love my SWB over a LWB. But I may personally shy away from cables beyond 400mm extra from what is specified. 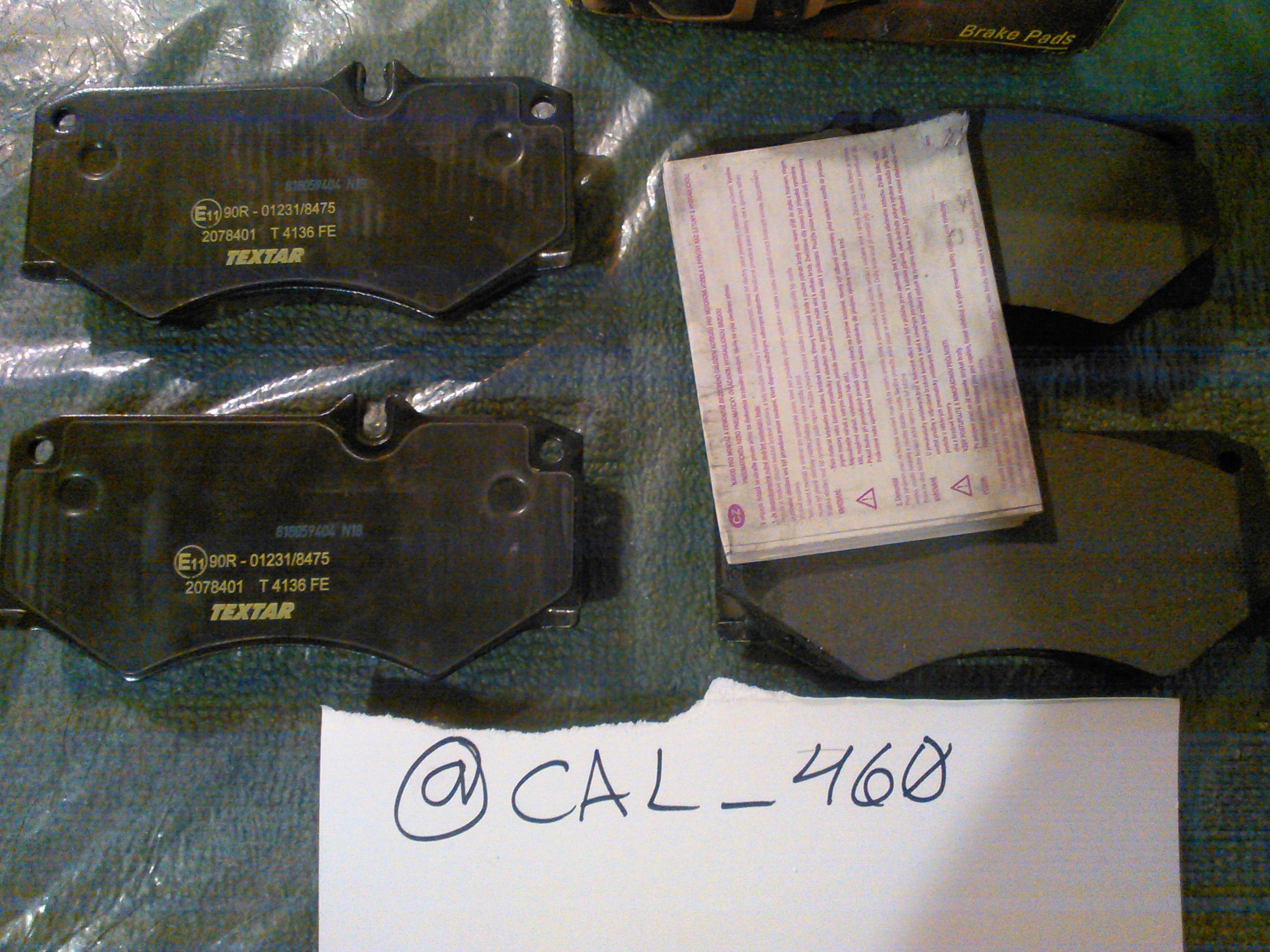 And it's great hearing from you as-well. It's funny that you'd mention Texar. And to a greater extent the ease of finding MB brake adjusters. It just so happens that I've recently acquired a set of Texar front brake pads. I also have a new set of delphi front brake rotor adapter plates and rods to accompany the pads. That brand was highly recommended to me by a contact of mine in Germany named Frank for their price and quality.

Frank also managed to find automatic adjusters. He sourced NoS adjusters for literally 1/3 the price Mercedes benz was offering over there. But as you could guess by now, they were the MB rated adjusters. I confirmed my suspicions as I looked at a thread made by autonovice or Bram, where adjusters shown for the perrot system had a 115 stamp. And the MB ones were 186. I swear those two members here are a wealth of knowledge, just like yourself. This is where my random story finally leads into some context:

The adjusters that I purchased were the culprit as to why I was doing this entire conversion from a perrot plate into MB.

Thus why I had to contact a polish friend of mine [Mr. P] to source me used Plates from an older and now past question of mine. TMI aside, I can tell you've a eye for good brands. Even ones that offer mere things like rivets. And I will defiantly take your advice about not installing longer cables onto my truck. As par for after-market cables. If Johnny Christensen said that his cables lasted over 20 years in a mining environment then I don't see the point of saving a few bucks on purchasing them over Mercedes benz ones. Seems like the MB ones are a great investment. And if you say that the aftermarket cables have sketchy lengths to them, that's yet another reason to avoid them entirely.

Also sorry for the rant, I just realized how much I talked. There was a lot of context to-go over. I also officially blame Aaliyah for making me coffee at this late hour where I live. I'm quite the hyperactive young-adult as it were already

I do have a question for you. It's rather off-topic to my question, but I'd value your input. What's your opinion about the Ssangyong 290 GTD. Is it a good candidate for my 250 GD NA? or am I better off adding a turbo to my 250 GD. While browsing the threads I was getting mixed results about the risks of adding a turbo to a NA designed engine. I cant't seem to get a straight answer anywhere
Those who aren't familiar with quality will chase quantity
Top

It's real sketchy where I'm at bro, but I've to admit. You're right. I've nothing to-do. I'm waiting on parts from Europe and I can do nothing but twiddle my damn thumbs. All three of 'em. But I'm defiantly not in the Dog-house here. If anything she gave me a 'boost' at a UnGodly hour to-do some Disney-esqued sh*t with her instead. With passive aggressive threats towards the best of my three thumbs if I were to-do otherwise. Love that selfish she-beast of a woman. But God save me if she were a red-head like that Irish chick that I'd mentioned ages ago. Sweet JeBus, I'm not man enough for that !

Mate - Since you're here - I was also meaning to ask you a question. Apparently I've a very low gear on my 250 GD. The front has 6.17 while the rear [according to the epc atleast] has ~ 5.86. When I click on the 5.86 option I get warnings that they aren't compatible for my truck. Thus I also suspect the rear 6.17 since it looks like a heavy duty axle. I've limited experience here, but I've noticed some people being able to recognize heavy duty gears dueue to their 'wine-bottle esqued' housing designs.

Do I've some sort of "special edition" G wagon? or is the 6.17 axle gears in particular an aftermarket or non oem.
Those who aren't familiar with quality will chase quantity
Top

I'm not necessarily saying to use a LWB brake cable on a SWB. My point was the longer of the pair could really be used on either side. My single cab has different cable guide brackets under the body than the original LWB body and the cables are too short to run in the new guide position. Some creative thinking like slightly longer cables solve this problem.
Top
Post Reply
24 posts